I setup with the same optical train as last time; the VRC 10", with the Mallincam 2” 0.75x Focal Reducer and the ASI071MC-Cool. The 2” Lumicon Deep Sky filter is on the front of the FR. I set the camera cooler to -10C and turned on the dew heater. The camera gain is set at 400 to minimize exposure times.  I opened the roof to a cool, clear night.

I started off the night with Jupiter.  I've never had much success with planetary images.  I blame it on the high humidity and the resultant poor seeing in SE Louisiana, but I'm sure my technique is also to blame.  From what I've read I might do better stacking planetary frames in Registax. 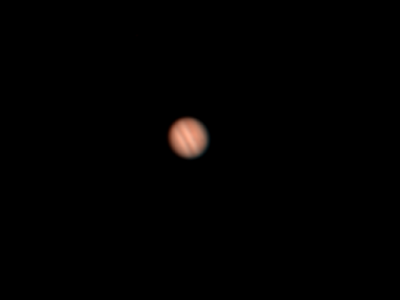 Started the autoguider and began an image of the Orion Nebula. Wow, at 30 & 60 second images were wonderful, albeit noisy until several are stacked. Sharpcap hung while changing the exposure duration.  The autoguider keeps the image rock steady. This is the first time I've captured the arching structure of M43 in my images.  The below image is 6 x 60 seconds at gain of 400.  The Trapezium region is blown out.  A larger number of shorter exposures would likely yield a nicer image. 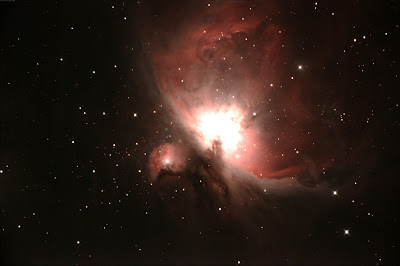 Messier 42, the Great Orion Nebula, is approximately 1,344 light years from earth.  The region includes clouds of neutral and ionized gas, dust, star clusters, and reflection nebula.  The much smaller Messier 43 is 1,600 light years from earth and is separated from Messier 42 by a dark dust lane.
I noted that when stacking in SharpCap, that many frames appear to be dropped. I went in the house to get coffee and was gone 10 min while stacking 1 min images. When I returned it showed only 2 stacked!  I think this is because in the stacking routine I asked it to align the frames. I'm not sure why SharpCap was rejecting so many frames.  That coupled with frames that failed to even load greatly slows down data collection.  I turned the align feature off and it is then stacked fine but some frames were still dropped.
At 2240 the temp is 42 and humidity is 80%. Sky meter reading is 18.60. Sky looks very clear but not my best sky meter reading.  Shut down at 2346.
==

March 18, 2017
Came out at 2100 on a nice night with scattered clouds, 67 F, 96% humidity and no wind.  I set up the ASI071 at prime focus with 4” of focuser rings and no extensions or focal reducers. I do have the 2” Lumicon DS filter on the end of the camera's nose piece.  I achieved focus at 35 mm on the focuser with this setup.  Note for this setup I had to significantly adjust the scope on the mount's dove plate to achieve balance
H 205-1, NGC 2841
Is a galaxy in the constellation Ursa Major (the big dipper) and it approximately 46 million light years from earth.  The galaxy is tilted away from us by 20-30 degrees.  The galaxy is surrounded by a nice star field.  Four minute single images didn't tease much structure out of the galaxy.  I need to stack but my camera is close to hitting the mount so I can't go any longer on it. 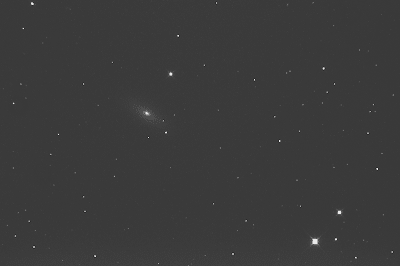 I noticed that with the ASI071MC-COOL camera in the focuser with the writing upright, the mount directional arrows work in reverse from the Mallincam.  I uploaded a single 240 second image (gain = 400) of NGC 2841 to astrometry.net to measure the field size.  It reported 40.5 x 26.9' with a pixel scale of 0.491 arcsec / pixel. This measurement allows a calculation of the reduction provided by the 2" 0.75x Mallincam Focal Reducer was 0.771.   This compares very favorably to the 0.770 observed reduction previously measured with my Mallincam Extreme.

The astrometry.net report also showed that "up" is at – 88 degrees so the camera's orientation is a bit off.  I suspected based on the mount directional keys that it would be closer to 180 degrees.  In the future I'll mount the camera in the focuser with the writing on the camera's back upside down to reverse the slew direction to what I am accustomed to.


H 43-1, NGC 4594, Messier 104, The Sombrero Galaxy
A very nice galaxy nearly edge on, turned towards us by just a few degrees.  It has a bright core and the full top half of the galaxy is illuminated.  The galaxy is oriented N-S and a prominent dust lane is evident.  It appears to be approximately 8 ' long.  The galaxy is in a rather sparse star field. 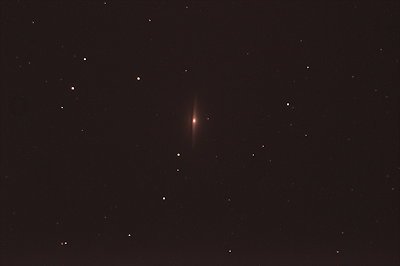 The above image is a stack of 10 x 120 seconds at gain = 400.  Stacking done in SharpCap.  There is a little illumination (amp glow?) on the bottom of the image, especially on the left.  I'm running the camera at -10 C.  A longer exposure would have been better to pick up more details. 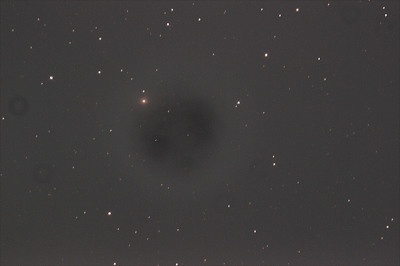 I've been seeing issues with ice formation on the chip at temps more than the -10 C setting. However tonight I'm getting a big circle of dark hazy nature so I have to turn the cooler off to make it go away. This isn't a good thing as it hurts the image and increases the noise level. Perhaps I need to add the auxiliary desiccant tablets to the camera.
Since I couldn't discern any detail of the galaxy, I didn't count this observation towards my Herschel 400 project.  Similarly I tried H 168-1, NGC 3184 but had similar issues with distortion of the image.   At 0148 clouds rolled in and ended the session. Learned some more about the camera & SharpCap
March 23, 2017

Came out a little before 2000. It is clear with a slight breeze and 72 degrees with 88% humidity. I installed the ASI071MC-COOL upside down to match the orientation with the mount's controls. No FR, prime focus with the Lumicon DS filter.  After taking a few dark frames I noticed that the
winds brought in clouds at 2026.   By 2200 the sky looked a little better with the sky meter reading was 18.43. Better than I expected with the clouds rolling through. It is somewhat clear now but high thin clouds are in parts of the sky.  As I've been hunting Herschel objects in Ursa Major, I decided to give Messier 81 a try with the new camera.

Messier 81, NGC 3031, Bode's Galaxy
The clouds held back and I got several 2 min exposures of M81. The raw subs were captured and included dark frame subtraction. The stacked exposure with 10 x 2 minute exposures (gain = 400, camera temp -10 C) looks pretty good but little detail in the galaxy's arms is evident.  This is a spiral galaxy about 12 million light years away 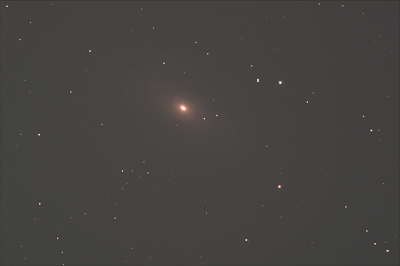 I had more issues with large dark circles forming on the images.  If I turn the camera's cooler off or at least set it to above 0 C, the circles disappear.  However they reform once I turn the cooler back on.   Clouds rolled in and ended the observing session at 2300 hours.
== 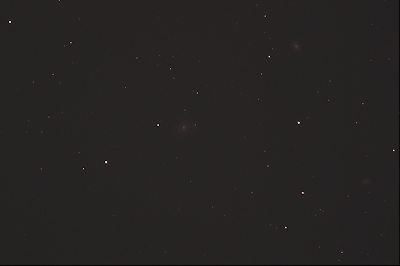 
H 21-1, NGC 3810
A face on spiral galaxy in Leo that resides approximately 50 million light years from earth.  The core is not overly bright.  Multiple 4 minute exposures was insufficient to pull out any detail.  I do note that the stars are a little elongated so apparently my guiding was lacking a bit.  Also the camera cooler was off as I was having issues with a dark circular region forming due to the high humidity.  The image is 8 x 240 seconds at gain = 400.  I'll have to try this object again to see if I can pull out any hint of the detail shown in the Hubble image. 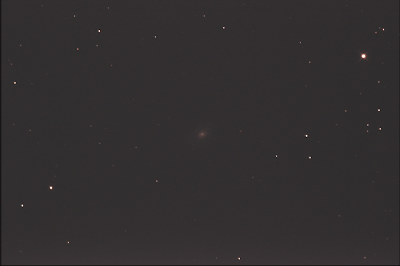 Based on feedback from ZWO, I installed the auxillary desiccant tablets onto the camera a couple of days ago.  Hopefully that will dry out the air in the chamber housing the chip and avoid dew or ice formation.  They also advised to cool down the camera slowly.  I setup the ASI071MC-COOL at prime focus with the 2” Lumicon DS filter. I started the cooler at mild cooling 16 c and will stair step it down.

I tried to get M81 & 82 in the same frame but they were too close to the edge of the FOV, so I'll need to use the 2” FR to get both. For now I'll concentrate on M-81.  At 2318 sky meter reading was 18.94. Temp is 62 F with 96% humidity
Messier 81, NGC 3031, Bode's Galaxy
Decided to try this object again to see if I could pull our a bit more detail.  The image below is 5 x 360 seconds at gain = 400 and the camera is operating at -10 C.    The frames were stacked in SharpCap.  Uncharacteristically I used GIMP to adjust the brightness and contrast, which yielded an improved image. Perhaps I'll try using AstroToaster instead of SharpCap's to stack and adjust brightness and contrast next time.  I had no issues with dew or ice formation in the camera. 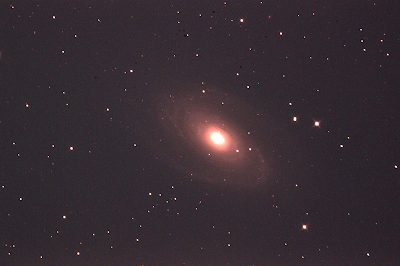 Next I turned my attention to Messier 13 (NGC 6205), one of the finest objects in the night sky. It contains approximately 300,000 stars and resides 22,200 light years from earth. I stacked 11 x 60 second frames at -10 C and gain 400. I avoided blowing out the core, but the exposure needs to be a bit longer to reveal more stars.