First light for the ASI071MC-Cool

Came out a little after 8 pm on a cool(58 F), dry (40%), and clear night. First order of business is to test my Mallincam and ensure it is working. Then I'll hook up the new camera and give it a whirl.

I'm using the Mallincam with only the 2” 0.75X focal reducer and Lumicon DS filter. This setup yields a 14.8 x 11.1 arcmin field of view (FOV).  I failed to install the heat sink so there is no cooling on the camera.   I took a 2 min image of M65 in Leo when it was 44 degrees up and it looked noisy but otherwise good. I stacked 5 x 3 minute images to reduce the noise. The autoguider is working wonderfully, no image shift or enlongated stars ! The stacked image is pretty good with some detail in the galaxy visible. If I had the fans of to cool the sensor it would be a bit cleaner. Now to switch to the new camera. 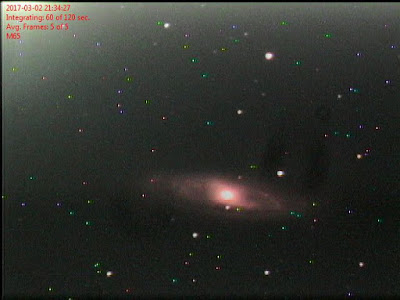 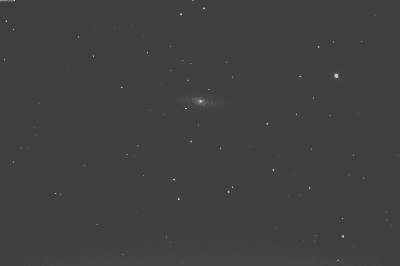 WOW, a really nice image for first try.   The FOV is enormous and the corresponding image scale is small.  As a result you can't see as much detail in the new camera's image.  I uploaded the image to astrometry.net and it calculated a FOV of 52.4 x 34.8 arcmin.   This is 3.4 X larger FOV than with the Mallincam.   I played a bit with the image adjustments in SharpCap, but I have more to learn in this area.

I turned on the cooler and set it to -20 C. It quickly achieved this temperature. I can't really tell any significant difference in the noise.  I took 3 x 5 minute exposures and stacked them in SharpCap 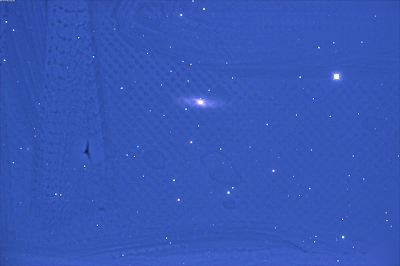 The images are blue despite my adjustments of the histogram. I need to learn to better use the white balance & hue adjustments. The stack of 5 min exposures doesn't reveal as much detail as the Mallincam did until you zoom in.  This camera is quite impressive.

More perplexing than the blue tint of the image is the black triangular structure on the left side of the image and the cross-hatched pattern through the image.  These appear to be related to the cooling.

I moved the scope over a bit to see if I could capture the Leo Triplet.  With my Mallincam I could never get this FOV to catch this collection of galaxies.  With the gain still at 400 and the sensor cooled to -10 C, I took 3 minute exposures and centered the galaxy trio.  There they were; M 65 at the bottom left, M 66 at the top left, and the edge on NGC 3628 at the top right.   I was able to adjust the white balance and histogram to get a nice black field.  I then stacked 8 x 180 second exposures.  What a nice image !  It is wonderful to have the resolution to enable significant zooming in to reveal added details.  This is why I bought this camera.  Astrometry.net measured this image as 52.3 x 34.8 arcmin. 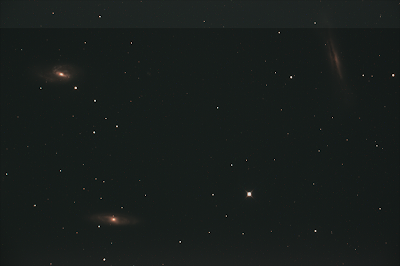 I'm not sure what causes the band at the top of the image.  Actually it appeared as a lightening at the bottom of the frame in the SharpCap preview.  I'll experiment with this more next time.  I shut down at 1:30 am – a nice first night with the new camera.
Posted by Luling Skies at 11:33 PM