I have been a model railroader since I was a child, but I've always had a passive interest in astronomy. My wife collects Beatles' memorabilia, but she also had an interest in astronomy. Our eldest daughter has been interested in astronomy for years. A few years back the family all chipped in and bought her a Celestron 130mm goto reflector. She began viewing in her backyard, joined the Pontchartrain Astronomy Society, and attending the Deep South Regional Star Gaze (DSRSG) each fall. In October of 2010 my wife and I attended the DSRSG with our daughter, son-in-law, and their middle child. We had a great time, but I wasn't tempted to jump into the hobby.

In August of 2011, our daughter asked if we were going to attend the DSRSG with them again. My wife said she wanted to go. I agreed on the condition that I could have my own toys to play with. To my great surprise she said yes! We looked at several scopes; mostly dobsonians and reflectors of various makes. We wanted a scope with goto functionality. Meade had a sale on their LXD-75 6" Schmidt-Newtonian and we were telescope owners. We got all the usual accessories: eyepieces, dew heaters, a Telrad finder scope, etc.. Because I wanted to see more than grey fuzzies, we got a used Meade DSI camera and a new laptop. We were in deep! Fortunately we were blessed with good weather and I spent the next several weeks in a crash course to learn how to operate the equipment.

In October we attended the DSRSG. After observing from my light polluted backyard for the past month, I learned what dark skies were like. Wow, I couldn't identify the few alignment stars that I knew because the sky was full of stars! Luckily my daughter is a sky maven and soon she had me up and running. We had a marvelous time. The scope performed well and we saw many of the sky's marvels. We were off on our adventure into amateur astronomy. We plan to document these adventures in this blog. 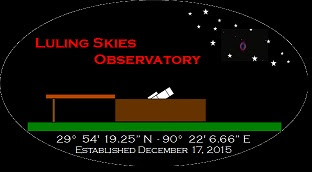 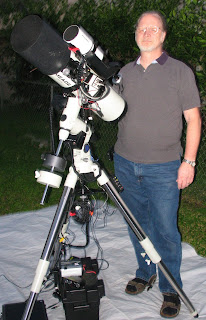 (If the charts are out of date, refresh your browser page to update the charts)