Jan 7, 2017
First observing session of 2017 on a very cold (34 F at 1900 ) and clear night. Will see how long I can last in the sub-freezing temps forecast for tonight. I logged into the Gemini with the web browser before plugging in the Mallincam and I appear to have retained connection, although I haven't fired up the Mallincam yet.

Setup the Mallincam with the MFR-5 and no spacers and the 50 mm ext tube & Baader 2 to 1-1/4” reducer. Turned on Mallincam and still have Gemini connectivity. Fired up Miloslick MallinCam Control version 3.3b,   The new version has blank menus and appears not to communicate well with the camera. It won't read settings but will display color bars and a live image from the camera. Even after restarting the program. Shut down the Gemini interface and unplugged the USB hub. Restarted Miloslick MallinCam Control, no change. Reinserted the USB hub and reestablished the Gemini web interface.  Fired up MallinCam Extreme Control version 2.8b and it talks to the camera just fine. Apparently a bug in the new Miloslick version. Took some screen shots to share with Bill tomorrow. While the Gemini web interface appears to be talking to the mount it won't initiate a slew to a target either from the hand controller window or the catalogs menu. Argh !! Shut down the web interface and but left the Ethernet cables hooked up. Will use the handset. Realized I had left the handset at the startup menu. Once I told it to do a warm restart, the web interface works fine. !! Yea!!  While I don't mind using the handset to control the mount, I would like to control via computer.

This time of year the Orion area is an irresistible target.  I took a series of 20 second,  AGC 6 captures of the Orion nebula 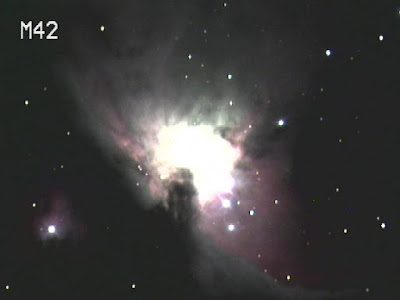 Took a series of 90 second,  AGC 6 captures of the running man nebula but they the exposures weren't long enough for the nebula to clear. 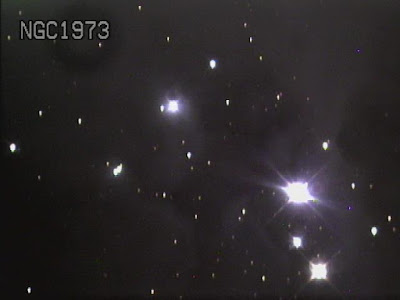 Continuing my Hershel 400 observing list with H 3-8 (NGC 2251) in Monoceros. A nice cluster with 4 segments.   To the SW there is a row of 4 bright stars and several fainter ones running SE to NW.   Perpendicular to the southern most star in this line to the NE is a is a semicircular cluster of 5 bright stars and many fainter ones. There is a dark lane running between these two clusters at this magnification. Then SE of the second cluster is an elongated inverse ? of about 14 stars.  Then NW  of the second cluster is a single bright star with 2 somewhat fainter stars further to the NW and many fainter stars in the region. 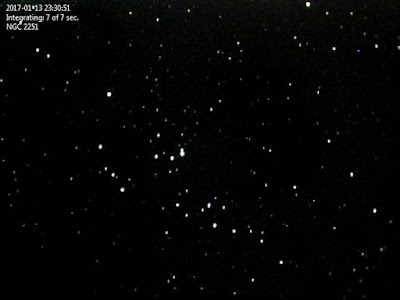 H 27-6 (NGC 2301), also in Monoceros is a sprawling cluster nearly 20 ' across.  To the E are 4 bright stars in an arc.  In the center is a cluster of 3 bright and many fainter stars.  To the W is a vertical line of 3 stars with a fourth star to the NW of the top star.  Further W of the southern star in the line is another bright star. 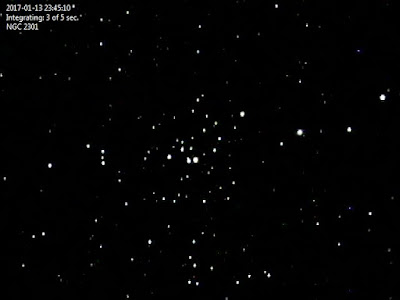 Continuing in the constellation Monoceros we come to H 60-8 (NGC 2311).  At the S end is a V of 6 stars with the opening back to the NNW.  The central cluster is oval in shape and composed of roughly 2 dozen stars  The surrounding star field is rather sparse.  Sky glow from the nearly full moon is becoming apparent as I'm not using a filter. 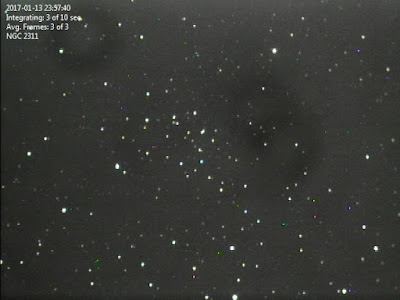 H 38-7 (NGC 2324) is in Monoceros.  Looking towards the full moon with no filter my contrast on the image was poor but sufficient to bag this cluster.  To the SW is a slight arc of 4 stars and 2 parallel star to the NW.  To the NE is a region of stars all of nearly the same intensity that forms the shape of a sword pointing to the NW the blade is about 5 ' long.  there are blade guards extending from the base of the sword to the SW and NE and then a handle composed of two small circles of stars.  Very nice object. 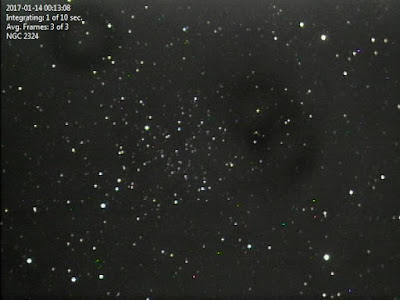 The cluster H 31-8 (NGC 2286) is hard to pick out.  I located it by finding the 3 bright stars to the E with the 4 star line arcing away to the S.  The main part of the cluster is due W from the star trio.  It is oval in shape and comprised of at least 2 dozen stars.  Looking near the full moon without a filter so my contrast is quite poor. 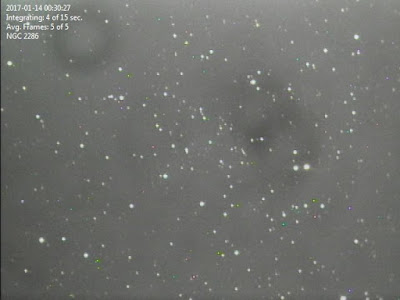 Moving onto the constellation Lynx we find H 200-1 (NGC 2683).  A spiral galaxy at an angle, nearly face on.  It is oriented NE to SW. A bright core is visible but no structure of the rings is evident with such poor contrast.  The star field is sparse in the immediate vicinity. 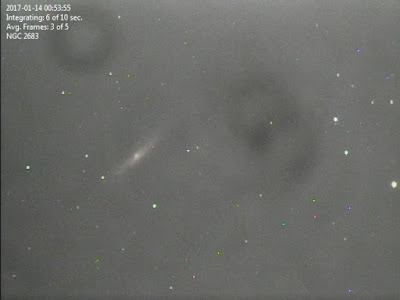 Moving over to Ursa Major we find H 242-1 (NGC 2681).  It is a small face on galaxy with a very bright core.  I can't make out but a hint of the halo extending about 1 core diameter in all directions.  I'll need to visit this object again and take longer exposures to pull out the structure. 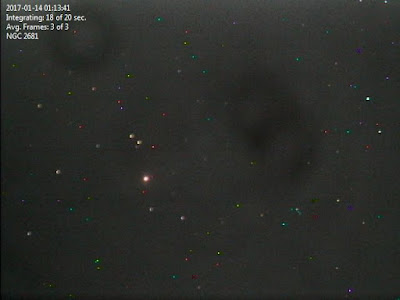 Over in constellation Coma Berenices is globular cluster H 19-1 (NGC 4147).  It is a small faint GC in a relatively sparse star field.  The cluster's core is packed with few individual stars that are discernible.   Some stars to the NW can be picked out but they likely are more than  individual stars. Another object I need to revisit to pull out more detail. 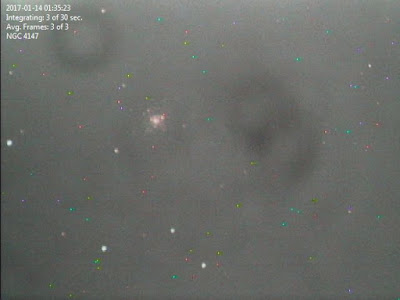 
Jan 23, 2017
Binocular viewing on a cool clear night with no moon. Observed the Orion nebula region and then spent some time in the interesting region around Mirfak (see the Cosmic Pursuits article Attendants of Mirfak.  Later I took in the Pleiades, Hyades, and NGC 457.   A relaxing evening under the stars.  I really enjoy using the Orion paralleogram binocular mount. It provides good stability to the binoculars and is easy to move between targets and to make small adjustments.


Jan 28, 2017
Came out a little after 10 pm after the clouds finally cleared. It is a cold, dry night: 48 F, 49% humidity, with no wind and no clouds. Will setup again with the full MFR-5, 50 mm ext tube, 1” ring, and 2-1-1/4” reducer for a F 4.43 and a 20.6 x 15.45 FOV. I may try adding a spacer or two later on to test the FOV change and vignetting & coma effect. Standard setup with Miloslick software; AGC = 6, APC = 0 , ATW, Gamma = 1.0, cooling set to -5C. Running the mount from the HC as when I plug in the USB Hub with the Ethernet socket, I lose control of the camera in Miloslick. Need to work on this during the day time.
Earlier in the week I installed the Belleville washers that Michael Herman sent me on the azimuth lock knobs so first order of business will be to check the polar alignment via drift and lock it in.  It wasn't too far off and the washers seem to give a tighter lock down.  Will see how it holds as the mount is used.

In the constellation Leo I found H 56-1 (NGC 2903).  It is a nice barred face on spiral approx 3 x 2 '  a bright nucleus   Bar is running NE to SW arms are trailing clockwise and more visible on the Bottom (S) than the top. 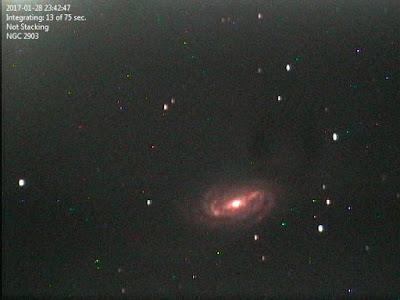 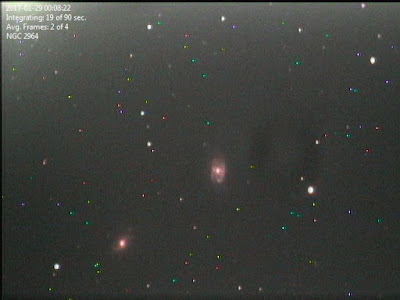 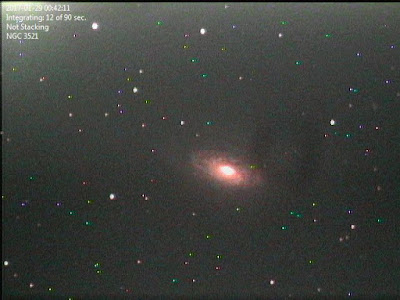 Continuing in Leo, H 28-2 (NGC 3226) is a dwarf elliptical galaxy that is interacting with the spiral galaxy NGC 3227.  NGC 3226 is face on with a bright core and little other distinguishing features.  It is approximately 1' in diameter.  NGC 3227 is more elliptical measuring  2 ' x 45'' and running NW to SE.  Its core is about 2 ' from the first galaxy's core.  The star field features 10 bright stars and a relatively sparse field of dimmer stars. 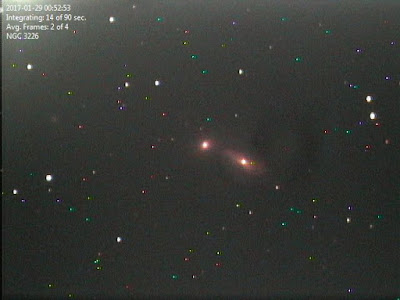 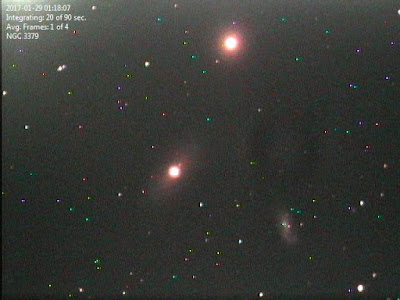 H 8-5 (NGC 3628), also in Leo, is a large edge on galaxy with a dust lane roughly 6 ' long.  It is oriented nearly due N & S.  There is no detail evident in the dust lane or the halo, which is brighter near the center West side.  At its widest point it is approx 45 ".  I can see the galaxy is larger than 8 ' but the edges are very diffuse and hard to make out the boundaries 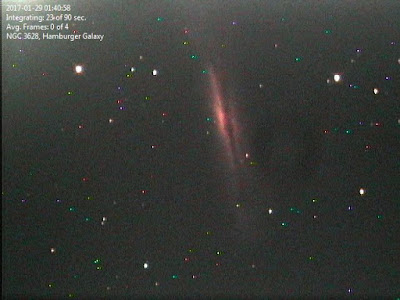