Has been quite cloudy and stormy of late so I haven't been able to view. This is a work night but this weekend is not projected to offer good weather and tonight does, so here I am. It is cold and dry with temps in the upper 40s and humidity in the 55% range.  I will setup again with the full MFR-5, 50 mm ext tube, 1”focuser ring, and 2-1-1/4” reducer for a F 4.43.  This setup give my Mallincam XT-418 a 20.6' x 15.45' FOV.  I may try adding a spacer or two later on to test the FOV change and vignetting & coma effect.  Standard setup, AGC = 6, APC = 0 , ATW, Gamma = 1.0, cooling set to -5C.  I have the Lumicon Deep Sky filter on.
My tracking is horrible with image shift after 40 sec images.  I found the w azimuth lock bolt was loose so I tightened it.   I need to spend some time polar aligning and getting my guiding scope operational.  However for now I want to knock out a few objects.  The constellation Cassiopeia is nicely oriented so I'll concentrate on the Herschel 400 objects in that constellation.

Herschel object H 35-6 (NGC 136) is a small tight cluster of ~ 15 stars in nearly circular pattern The SE corner has a straignt line of 3 stars running NNE to SSW that are brighter than the other stars in the cluster.  The cluster looks almost like Scorpius with the 3 stars and then to the NW is a curving tail that bends to the SW.  Following this line of stars to the SW . 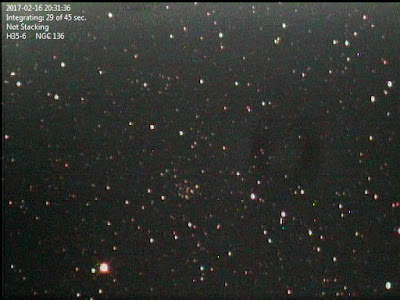 H 78-8 (NGC 225) is a large OC of around 2 dozen stars that are much larger and brighter than the background stars.  The stars are arranged in an amorphous pattern with a 6 star wavy line at top running E to W. 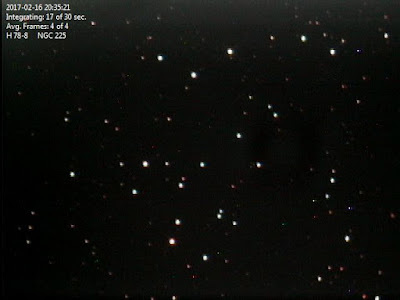 H 159-1 (NGC 278) is a small face on spiral galaxy.  At only 2 arc minutes in size, the image scale is rather small.  I would do better without a focal reducer and perhaps with a Barlow.  I am only seeing the object at ~ 1' in size.  It is however unmistakable as a galaxy.  I would note that even the Deep Sky Survey image of this galaxy reveals little structure. 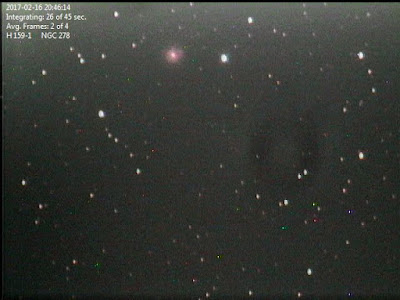 H 64-8 (NGC 381) is an open cluster in a rich star field.  There is a line of over a dozen stars running ENE to SSW.  The cluster is comprised of > 3 dozen stars and one that is brighter than the rest & larger 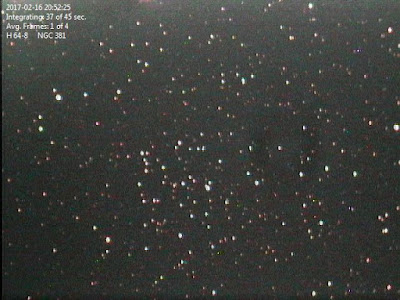 H 45-7 (NGC 436) is a small triangular shaped cluster of around 2 dozen stars.  The triangle points to the center star of a 3 bright star line to the NW.   The line runs NNW by SSW. There are long curving lines of stars extending from the cluster to the SW, SSW, and S. 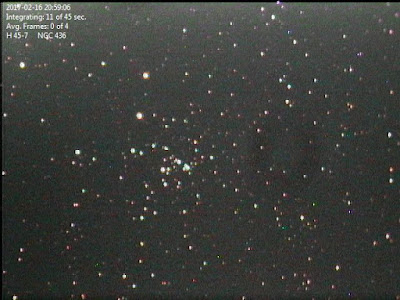 H 42-7 (NGC 457) is a bright cluster consisting of two quite bright stars and a spinal run of stars with appendages off to the top and bottom.  The spine consisting of 15 - 20stars runs NW to SE.  The top "eye" star is the largest and has 5 small stars arranged into a square to the star's E.  The third brightest star in the group is in the top appendage, which runs N.  The southern appendage "arm" or "wing" is 2 stars wide and curves to the W.  Whether you see a dragon fly or ET, this is a nice cluster.  First a short exposure to show only the bright stars of the cluster. 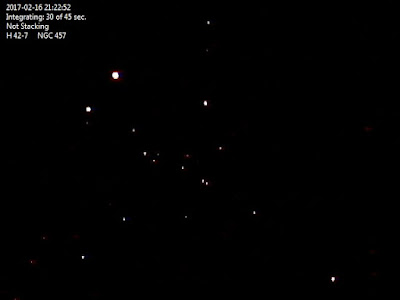 and a longer exposure for a deeper view. 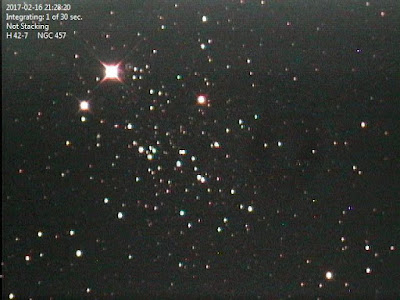 H 48-7 (NGC 559) is a broad convex line of stars running SW to NE through the FOV.  In the SSW is a line of 6 stars running NW to S.  The cluster is roughly spherical and sits near the apex of the convex line.  It is comprised of a couple dozen stars,  many fainter than the stars comprising the convex line.  The surrounding star field is rather sparsely populated. 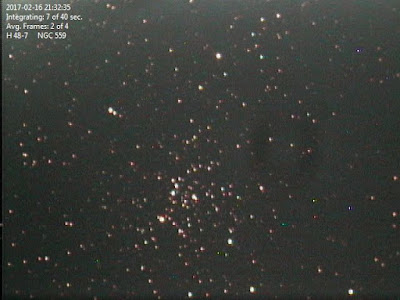 H 49-7 (NGC 637) is a cluster with hard to recognize boundaries.  There are 4 brighter stars and 10-16  smaller stars in a roughly circular patter.  There is a line to the E that curves toward the SE that is comprised of around 15 stars.  At the end of the line is a concave semi-circle of 5 stars.  The FOV includes 2 bright stars to the NNW of the cluster and one to the SE.  There is also a larger star just on the edge of the FOV to the WSW.  is rather sparse of stars but there one to the SW that is bigger than any in the cluster 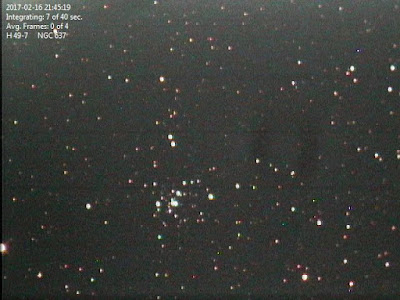 H 46-7 (NGC 654) is a bright large star with a cluster of > 2 doz much smaller stars to the SE.  From the bright star there is a z shaped line that leads to a long line of 9 stars extending to the NNE .  There are few stars to the E of the cluster, but to the W is well populated. 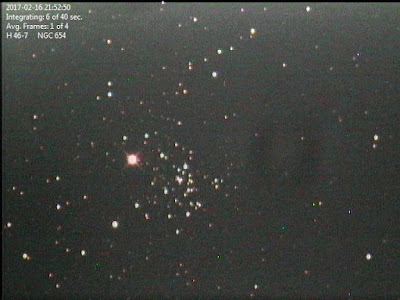 H 65-8 (NGC 659) is another cluster with hard to discern boundaries as it is in a rich star field.  9 bright stars litter the core of the cluster with many faint stars surrounding.  There are many other stars to all directions. 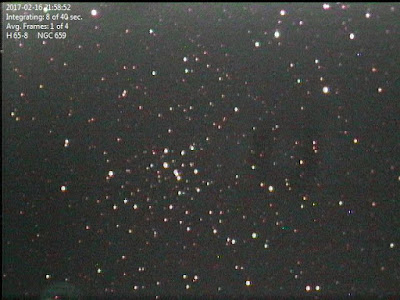 H 31-6 (NGC 663) is a broad cluster of nearly circular proportions comprising some    20 or more stars. The star field is sparse to the E of the cluster but full in all other directions. 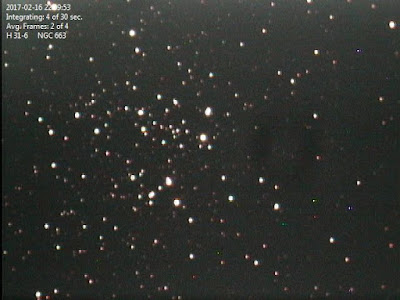 With a shorter exposure depicting only the brighter stars you can see 4 "rays" emanating from a point on the southern edge of the cluster. 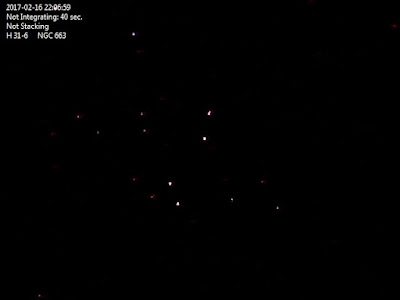 H 66-8 (NGC 1027) is a cluster comprised of around 10 bright stars in a very dense star field.  There is a central star that is much larger and brighter than the others.  As is often the case with me, I have insufficient artistic abilities to describe a shape in this cluster. 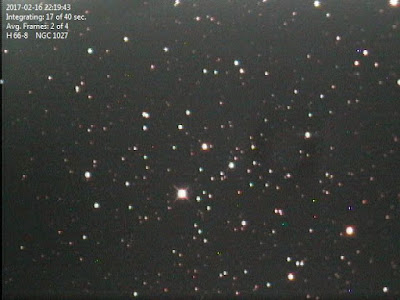 I completed all the Hershel 400 objects in Cassiopeia !  A very productive night.   It is late for a work night and I'm shutting down at 2326.

Came out at 6:45 on a warm clear night, very unusual for February. Set up with the Mallincam at prime focus and worked on getting the polar alignment better. Using standard camera settings: AGC = 6, APC = 0, gamma = 1. Got the scope polar aligned with the polar scope as best I could and then performed a drift alignment on Mirzam (front foot of Sirius) and then Mirach.

I left the camera at prime focus (11.4 x 8.5 arc min FOV) with no filter and jumped into viewing Hershel objects in Leo. First object NGC 3227 and I'm seeing significant image shift between 1 minute exposures. Very disappointing.  Apparently my drift alignment procedure is not as sensitive as imaging.  I had hoped to avoid guiding in my setup but it looks like that will be needed, especially at prime focus.  I'll hit a few of the brighter targets tonight and work on the autoguider and software next session.

H 29-2 (NGC 3227 & 3226) is a pair of interacting galaxies (ARP 94).   The two galaxies have cores of similar size and brightness but the galaxy on the lower right (NGC 3227) is more face on, bigger, and elliptical.  The long axis is towards the smaller galaxy. The smaller galaxy (NGC 3226) appears to be more circular.  I can't discern the outer edges of the two galaxies at this exposure level and tracking is insufficient to allow a longer exposure.  Would be a good object to revisit when I get the autoguider going. 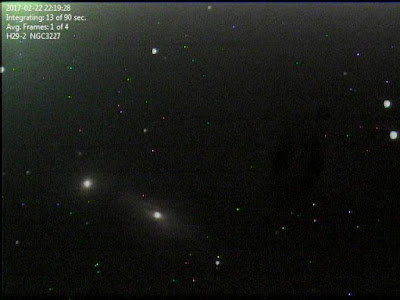 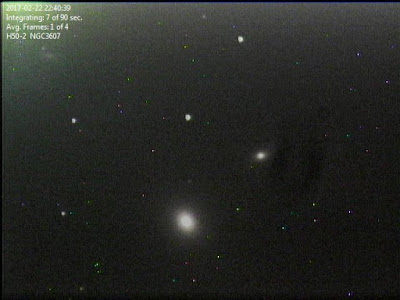 Packed it in around 10:45. Next time I'll fire up my Orion Awesome Autoguider to address the poor tracking

Feb 25, 2017
Set up with the 2” FR + MFR-3 for a FOV of 18.6 x 13.9' and F 4.91 and the 2” Lumicon DS filter. I also setup the Orion guide camera tonight to see if I can improve my tracking.   After climbing the learning curve with the autoguider &PhD2, I found the guiding to work quite well as I was able to take 120 second images and stack them with well shaped stars.  This is a huge improvement in my capability to capture faint details in objects.  Continuing with the Herschel 400 object hunt.
H 27-1 (NGC 3412) is a nearly face on elliptical galaxy oriented NW to SE.  There is a bright core and the halo extends 1 core diameter to each side and 2-3 diameters to the NW & SE. No details in the halo are discernible.   The galaxy resides in a nice star field of all similarly sized and brightness stars. 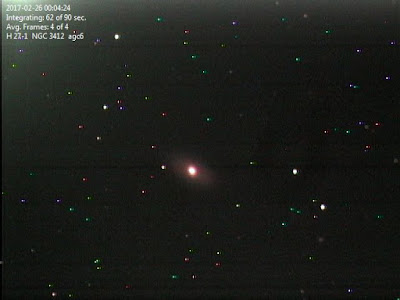 H 44-2 (NGC 3190) is a near edge on galaxy oriented Nw to SE with a bright core visible on the SW side.    there is a prominent dust lane running just below the visible core.  A remarkable FOV with 2 other galaxies visible and another just at the southern edge of the FOV.  This is the Hickson 44 compact group. 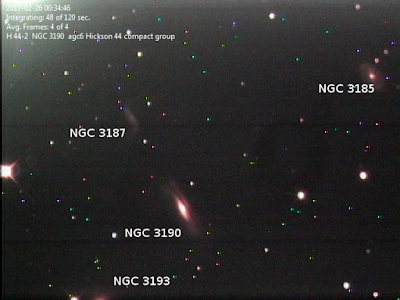