The point in building an observatory in my backyard was to be able to use my equipment to observe more frequently.  So how is that going - GREAT !  Five observing sessions in January.

January 3, 2016
Opened the roof at 7:15 pm to the first clear night in a week. Hope to get in a couple of hours viewing, but can't stay up too late as I have to work tomorrow. It's a chilly 50 F with only a slight breeze.  Powered up the camera but the Miloslick software doesn't seem to be communicating with it.  After several minutes I realized I had the video input set to composite instead of S-video.    With that little detail taken care of  I got to observing.   Using my Mallincam VRC-10 CF, a Mallincam 2" 0.75 focal reducer, Lumicon Deep Sky filter, and my Mallincam XT-418 camera, The first target - the Andromeda Galaxy, Messier 31. 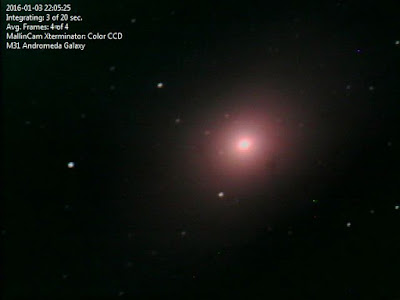 Next up, Messier 110, a companion galaxy to Andromeda. 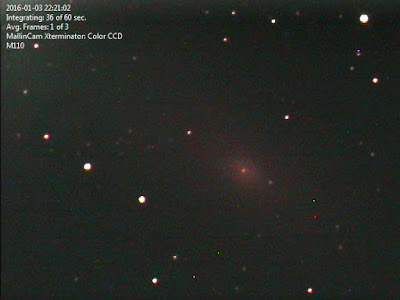 Next on my hit list is NGC 147 a galaxy in Cassiopeia.   This is an object I've never seen before.  The G11 mount slewed to the spot and nothing was there.  I slewed to Schedar and aligned the mount.  Back to NGC 147 - nothing.  This was my third attempt to observe this object.  After several more attempts I shut down at 1050 pm.

January 9, 2016
Opened the observatory about 6:30. Clouds are to roll in around 9 – 10, so don't have a lot of time.  I spent some time working on the counter weight down position for the scope. I had noted the other night that the scope's axis was off set from the mount's Right Ascention (RA) axis. I looked again at the Losmandy video on setting this position and I used a small level just as he did to ensure the RA axis was a vertical as possible. Then I found that the Dec axis setting, using the built-in level was easy to carefully set. Then when viewed from behind the scope and mount's RA axis are aligned. This may have been a problem with my prior observing session and poor gotos and tracking.


I fired up the mount and did a 4 star alignment. I then slewed to several stars and bright deep sky objects and all were in the FOV in 11 and 18 mm eyepieces. The goto accuracy seemed to be better than it was the previous session. Got nice views of M42, NGC 457, M31, Castor (a nice double star), The Double Cluster (NGC 884) is really nice in the  Explore Scientific 30 mm eyepiece (82 degree FOV).

By 8 the wind really picked up and was blowing things around. It was nice being inside as it at least partially shielded me and the scope from the wind. The wind brought in the clouds and I shut down a little before 9 pm. Sure is nice & easy to simply unplug the electricity, close the roof, put on the turnbuckles, and lock the door. I love it !! 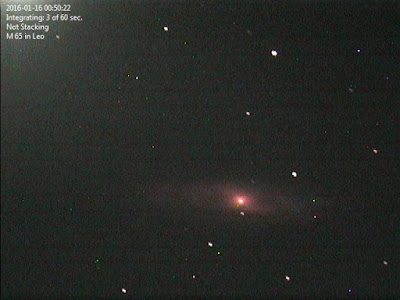 Shut down a little after 1 am so I'd been up since 6.   Excited I'm getting more opportunities to view now with the observatory so I don't feel so compelled to stay out as long when I view.

January 17, 2016
Setup a little after 6 with my daughter Heather. She brought her scope (Celestron Edge HD 1100) over and so we finally have the observatory populated with both scopes.

You have to watch your step around the tripod legs, wires, and tables, but the 8' x 12' observatory bay is big enough for us to use the two scopes simultaneously.

We had a good time visual observing for a couple of hours and then called it a night.  It is wonderful to slide the roof closed, unplug the equipment, and lock the door and head inside !


Came out late after dinner around 9:30. A nice cool night with sparse thin clouds. Around 49 F with 71% humidity and 41 F dew point and no wind.  Experimenting with the MFR-5 II. I've got both elements on and a 10 mm spacer at the back and the image of Messier 42 (Orion Nebula) has comma shaped stars, stars with donut holes, although no vignetting, but an overall displeasing appearance. Removed the 10 mm spacer and it changed the focus plane by an amazing amount. I had to add another spacer to the focuser to achieve focus. The comma and donut stars are gone, replaced by a nice flat field.   The shot below is a 20 second exposure to pickup the wispy gas and also Messier 43, but at the expense of totally blowing out the center of the nebula. 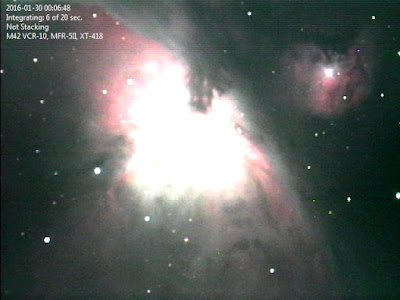 I notice on the histogram I'm getting a broad band of signals instead of a concentrated smooth curve. Seems like a lot of noise – dirty optics ? 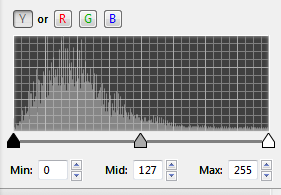 Clouds became more numerous around 1245 so I shut down for the night.

The observatory is so convenient.  It allows me to view much more often and without the hassle of setting up and tearing down.   I now spend more time actually observing objects and trying different equipment setups and techniques. I look forward to many peaceful nights viewing through my window of the universe.
Posted by Luling Skies at 4:37 PM