Since starting in this hobby in 2011, I've often thought of when I would upgrade my equipment. I have used my Meade LXD-75 6" Schmidt-Newtonian reflector quite a bit and coupled with my Mallincam Extreme 2, I've seen more than I thought I ever would, especially from my light polluted backyard. As I tried to view deeper images I needed longer exposures on my Mallincam but my mount was struggling. I installed a Hyper tune kit on the mount and that got me to 75-90 second unguided exposures but there was significant image shift between images.

In mid-2013 I decided a new mount was necessary to move to the next level in observing. While I had owned only a GEM style mount, I had used my daughter's Celestron alt-az mount. Considering I would mostly be observing from my backyard I knew exposures of 2-3 min or perhaps a bit longer were in my future. Concerns of field rotation lead me to decide on a GEM design for my new mount. My 6" S-N reflector, camera, guider, finder, etc totaled nearly 30 pounds, so I knew I needed a mount with at least a 45 pound capacity, but 60 pounds would be better. In my shopping I studied the mounts by Celestron, Meade, Orion, and iOptron. I tabulated specifications, read reviews and user accounts from the Internet forums. I felt the new Ioptron IEQ45 might be a good fit for my needs. It got good reviews and was under constant improvement by the manufacturer. I was intrigued by the then new CEM 60, but it was too new for there to be much information available.

The upper echelon of mounts such as those by Astro Physics, 10 Micro, and Paramount were beyond my financial means. So I turned my attention to what appeared to be the intermediate level of quality, yet reasonably affordable mounts; Losmandy. I found the mid-priced Losmandy G-11 had very good specs, was solidly built, and the company had an excellent reputation. The Gemini control system was well respected and supported. Still with all the options I wanted it would cost around $4,000, a bit more than I had in my astronomy piggy bank. So I decided to get the Ioptron IEQ45 Pro. It would be a step up in quality from my LXD-75 and for considerably less money than the G-11. The order was placed in the summer of 2014, and then, my situation changed and more money became available for astro-gear. I canceled my IEQ 45 order and contemplated my new possibilities.

No I hadn't hit the lottery or robbed a bank. I still had limits to what I could afford, but my budget had grown. Spending my full budget on an Astro Physics or Paramount mount would be nice, but all I had to put on the mount was my Meade 6" S-N. Not a bad scope but I hoped for a bit more aperture. So I decided to go for the G-11 with Gemini 2 and a Mallincam Video Ritchey-Chritchen (VRC) 10" with a carbon fiber tube.

The Mallincam Optical Tube Assembly (OTA), produced by GSO, gave me a significant boost in aperture (6 to 10") and the Ritchey-Chritchen design is great for imaging.  The carbon fiber tube ensures minimal dimensional changes during an observing session and it is well baffled to minimize internal reflections.  The weight is only 34.4 pounds so it is manageable for medium capacity (45 - 60 pound capacity) mounts. 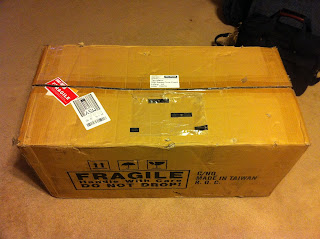 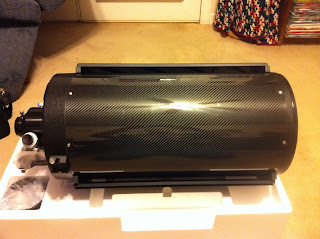 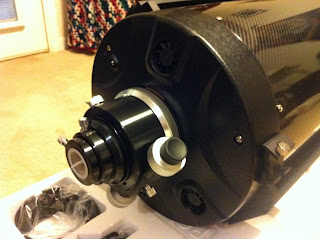 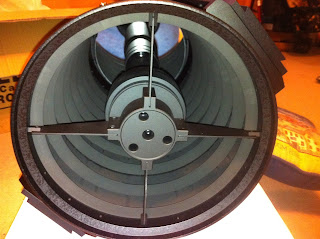 The G-11 mount is a monster compared to my Meade LXD-75 mount.  The Loasmndy tripod is well made and very stout.  The mount clutches can be a bit hard to operate but substituting the optional knobs with 3 "handles" makes it much easier.  The motors easily handle my scope and associated gear as long as the system is appropriately balanced.  The Gemini system is not as intuitive as the Meade system and it took some getting used to but the excellent Gemini 2 web page by Tom Hilton and the Gemini web page by creator Rene Gorlich eased the learning curve.

I would have little time to learn the new system before attending the 2014 Deep South Regional Star Gaze.